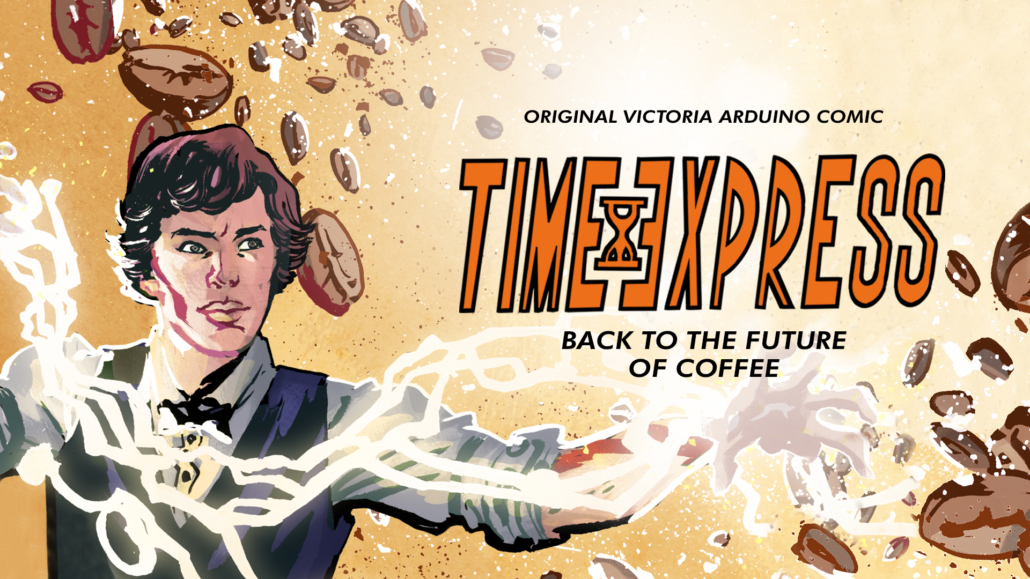 Have you ever wondered what could happen if a person who lived in 1901 were catapulted by a time machine into the World Barista Championship?

That’s how the story starts of the young inventor Albert in a fun comic book created by Victoria Arduino and produced in collaboration with the cartoonist and author of renowned international publications Giuseppe Camuncoli, who handled the layout and creative direction. Alongside him, the writer Giuseppe Zironi, known for his many Mickey Mouse stories, the designer Lorenzo Zaghi and the colourist Francesco Segala. These are both young authors who have been working in the independent comic strip sector for years.

This comic book, that sets out to celebrate and pay homage to the six years of partnership between Victoria Arduino and WBC, is an explosive mix that features unexpected twists as well as real and science fiction characters. The characters are always driven by the same passion and commitment that people who have participated even in one world competition have come to know: in Seattle, Dublin, Seoul, Boston and then in Amsterdam.

Life is full of choices and Albert, a young inventor who has built a time machine, has chosen his path. To travel in time to discover all the secrets of the official machine of the World Barista Championship.

Download the comic book and travel with Albert into the world of competitions.

This site uses cookies. By continuing to browse the site, you are agreeing to our use of cookies.

We may request cookies to be set on your device. We use cookies to let us know when you visit our websites, how you interact with us, to enrich your user experience, and to customize your relationship with our website.

Click on the different category headings to find out more. You can also change some of your preferences. Note that blocking some types of cookies may impact your experience on our websites and the services we are able to offer.

These cookies are strictly necessary to provide you with services available through our website and to use some of its features.

Because these cookies are strictly necessary to deliver the website, refuseing them will have impact how our site functions. You always can block or delete cookies by changing your browser settings and force blocking all cookies on this website. But this will always prompt you to accept/refuse cookies when revisiting our site.

We fully respect if you want to refuse cookies but to avoid asking you again and again kindly allow us to store a cookie for that. You are free to opt out any time or opt in for other cookies to get a better experience. If you refuse cookies we will remove all set cookies in our domain.

We provide you with a list of stored cookies on your computer in our domain so you can check what we stored. Due to security reasons we are not able to show or modify cookies from other domains. You can check these in your browser security settings.

We also use different external services like Google Webfonts, Google Maps, and external Video providers. Since these providers may collect personal data like your IP address we allow you to block them here. Please be aware that this might heavily reduce the functionality and appearance of our site. Changes will take effect once you reload the page.